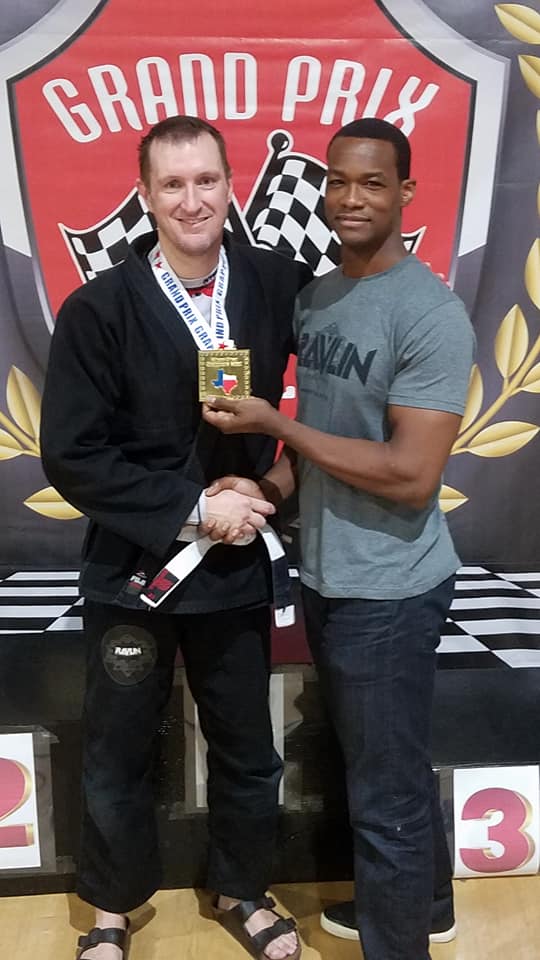 April 2017 I competed in my first Brazilian Jiu Jitsu tournament. It was pure chaos and I was so shell-shocked. I experienced a huge adrenaline dump my first match. I got third place in my tournament because there was only three people competing. Coach Angelus is always telling us to compete and test your-self in competition. I had planned on doing another tournament in 2017 but got hit with several minor injuries through out the year.

Fast forward to 2018 and the Battle of H-town was being held downstairs from our newly constructed school. I felt compelled to “protect our house”. I however was 223 lbs and did not want to fight in the 210 lb to infinity division. I had a couple of months to prepare and get into the the 190 to 210 lb weight division. I started BJJ to get in better shape. I had never “dieted” before. I started to really watch my calories and make healthy eating choices. I made as many classes as I could. I booked Coach for multiple private lessons. The month leading up to the tournament my teammate John came to my private lessons to be my training dummy so Coach could watch me and correct my technique. The Wednesday before the tournament I went to back to back BJJ classes. I got home and was 199.6 lbs.

The day of the tournament there was so much waiting. I was scheduled to start my bracket at 12 pm but did not have my first match till 3:15 pm. My first match I was surprised I won. I thought I got dominated by my opponent but I won 4 to 2.  The second match I won 13- 0.

Both matches I can barely remember anything. It is crazy how much more intense tournament competition is compared to hard rolling. Some of my vague memories of the matches include:

It was still extremely scary competing. It was cool to win first place but 5 minutes after the match that five dollar medal did not mean anything. I’ve been training almost 2 years and it has been a crazy journey. I am still so new to BJJ that I can see where I started. I am enjoying the experience and was back on the mats the Monday after the tournament. If you are undecided if you should compete, do it. It is such a mental and physical challenge to compete. Come join me at one of Houston’s best gyms Ravlin Martial Arts and learn Jiu Jitsu.